The CMP crew had one final job on our to-do list for 2019: contributing to a day of great entertainment at the legendary Coral Welsh Grand National!

Widely regarded to be the biggest horse racing event in Wales, it is held each year on 27th December at Chepstow Racecourse in Monmouthshire.

Originally held at Ely racecourse near Cardiff (from its first ever run in 1895), the race has been held at Chepstow since 1949. The Chepstow Racecourse is about 2 miles long, and is used for both flat and jump racing events.

The Coral Welsh Grand National is a Grade 3 National Hunt steeplechase that draws in thousands of eager racegoers each year. So it’s little wonder that, despite the weather being reliably terrible, an impressive 9,500 people (clearly unfazed) managed to rock up!

The Box That Rox team made the long trek from Sussex to Monmouthshire the day before – aka Boxing Day. After parking the Box at a suitable location somewhere within the racecourse grounds, we were treated to a hearty meal at the nearby Two Rivers pub (which had a tantalising and appropriately festive menu!).

What’s more, we were kindly provided with on-site accommodation at the racecourse – staying in the rooms typically occupied by competing jockeys! Close to the stables, these rooms were just a short trot from where the Box itself was stationed.

After a comfortable night’s sleep and a substantial breakfast, we got straight on with setting up for the day ahead. The Box That Rox would be in operation from 10AM to 5PM, making it a fairly lengthy booking on this occasion!

It should be pointed out that we were far from the only entertainment on offer (besides the main event of course!). In the main marquee, there was a crooner (think Michael Bublé) providing hours of sonic joy to the Chepstow attendees. And, as befitting any outdoor event, there were the usual stilt walkers stomping about the place (as evidenced here)… 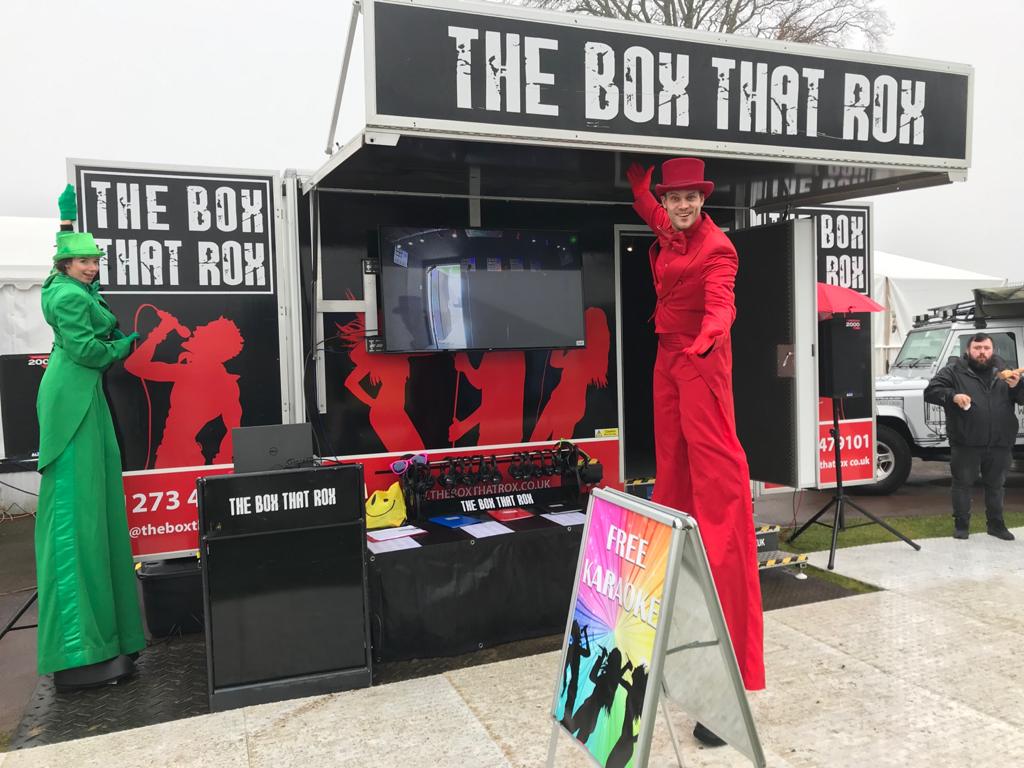 And also a fair few fire breathers and fire poi enthusiasts in attendance! Case in point…

Alongside this medley of entertainment was a tasty combination of food and drink. From giant Yorkshire puds to pulled pork with apple sauce – by way of platter upon platter of roast spuds – racegoers and CMP crew alike were thrilled with the winning race day menu! Plus the usual hot dog and burger stands of course… 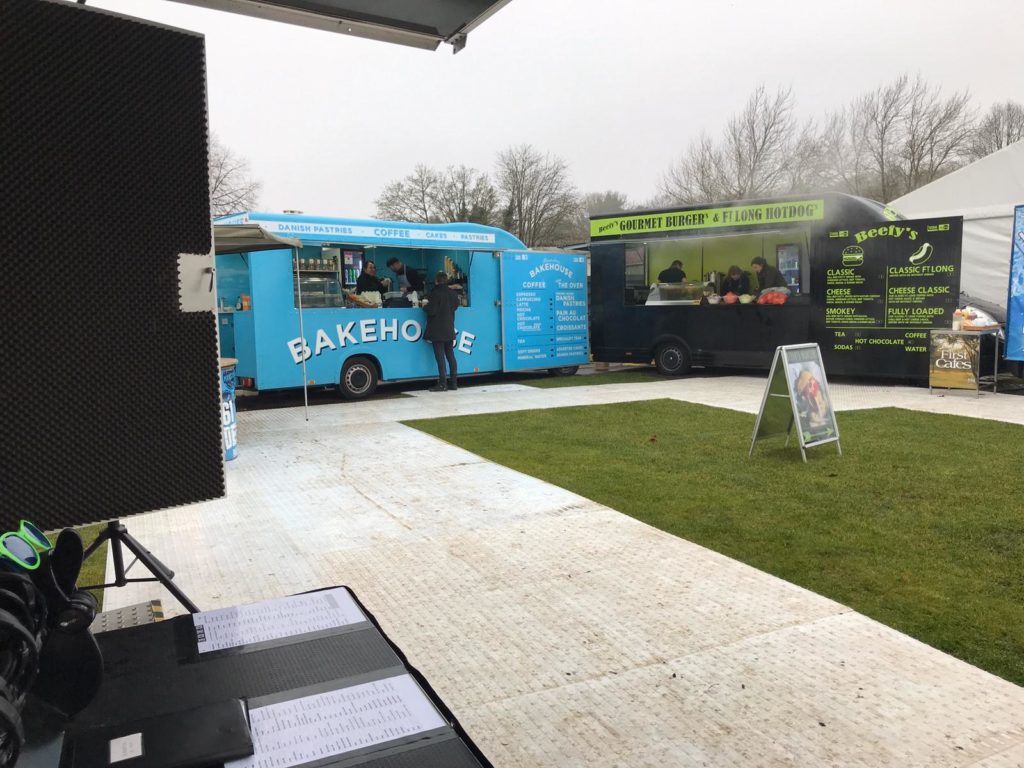 What’s more – for those in need of regular replenishment – there were pop-up bars featuring the best the local breweries had to offer!

So needless to say, the Box played host to a large number of suitably refreshed racegoers that day – who gave their favourite tracks some welly in our karaoke booth!

We were really impressed with their unrelenting enthusiasm, not even slightly dampened by the drizzle outside! Our ears still ringing, we departed for Sussex later that evening.

Our time at the Welsh Grand National was a fitting end to what has certainly been an eventful year – and with 2019’s to-do list now complete, we look forward to what 2020 will bring! 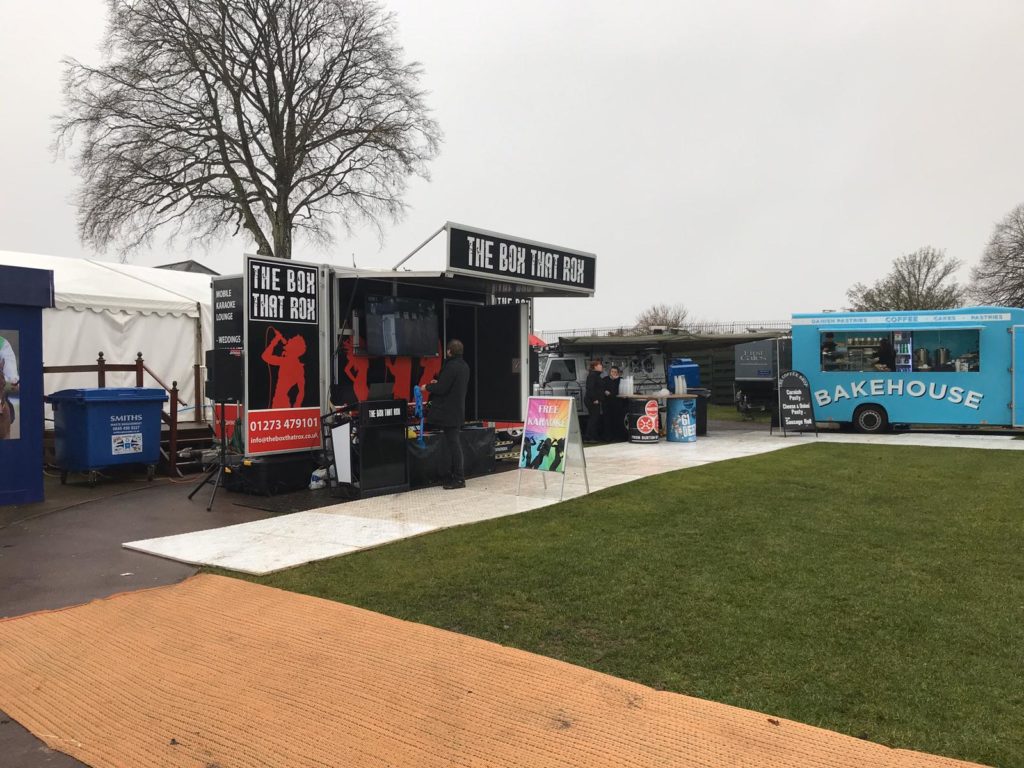